How to Replace a contract file

There are lots of reasons you might want to upload a new version of a contract to replace the prior version that was uploaded. The first version may be a draft, and you now have an updated draft or the executed version of the contract. Or maybe the first version was partially executed and now you have the fully executed version. Or you might have an amendment to a contract that's a complete replacement (i.e., it's amended and restated) so you just want to swap it in. We've got you covered!

There are two ways to do this.  If you have the file, and just want to swap it out on the Contract Page, take a look at the first method.  If someone emailed it in or it has been uploaded already into ContractSafe, try the second.

Replacing on the Contract Page

On the contract page for the contract you want to replace, you can select our Replace feature under the More Options button (just next to the "Send" button).

Replacing with a document that's already in ContractSafe

Sometimes your team may email in a new draft or contract.  Or someone else might add a new contract, not realizing it's an update to a prior contract.  Whatever the case, it's super easy to take a document that has been uploaded to ContractSafe, and replace an existing contract with it.  Just check the box of the contract on the contract list you want to use for the replacement.  Click on the Move option and select Replace existing contract: 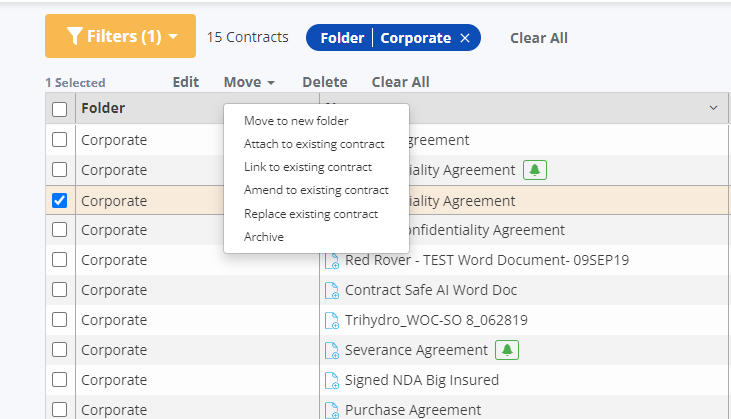 This will bring up a list of contracts for you to choose from.  Just select the contract you want to replace (you can type any key words in the meta data so it's easy to find the right document quickly), and click update.  The new contract will replace the document you selected, and the old document will be automatically saved as an attachment for your reference.

That's it! It just takes a few seconds to use the Replace feature to replace an existing contract with a new version.