Are You Guilty of Making These 6 Contract Management Mistakes?

Contract management is like flossing … you know you should be doing it more often and probably be doing a better job. But … there always seems to be other things that get in the way.

Your dentist may have told you … if you don’t floss properly now you’re going to have problems later on in life. Well … the same rule can apply to contract management.

While not managing your contracts probably won’t put your physical health at risk (unless you factor in stress), your company’s financial health is another story.

Not forgetting dates has not been the case for so many companies. As one example, let’s look at what happened to Park City Mountain Resort.

Park City Mountain Resort's owner Powdr Corp. (the tenant) forgot to send a letter by the deadline in March 2011 to renew its lease for another 20 years, allowing the lease dating back to the 1970s to lapse.

Forgetting to renew the copier contract is one thing. But the lease for your ski resort?

The reality is that it's hard to track business contract dates. If you don't have a solid contract management system in place, you might put those dates on someone's calendar. You might store them in a spreadsheet. But people leave, are out sick, and forget to check on busy days. Calendars are not good solutions for tracking contract renewal and termination dates.

Solution: Stay on top of your contract dates with a good, easy to use contract management software that can send multiple reminders to you and other members of your team via email. 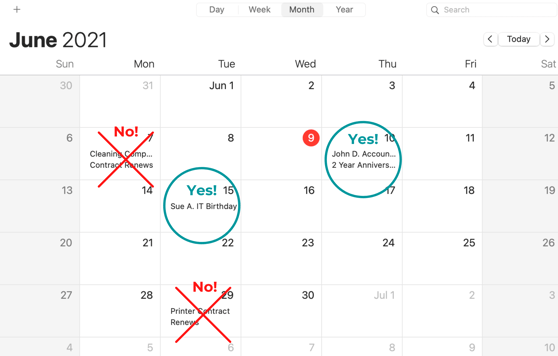 2) Not Having a Single Point of Failure (SPOF)

Remember the Death Star in Star Wars? It's probably the most popular example of a SPOF. Because of a SPOF, Luke destroys the entire Death Star with one amazing shot in the original Star Wars. Don't let this happen to your business!

Your contracts can turn into the Death Star with one of these system failures:

Solution: Make sure your contracts are stored electronically, are backed up regularly automatically to an offsite location, and nobody in your organization can accidentally (or maliciously) delete your important contracts.

3) Not Assigning a Contract Manager

Ever go to a potluck dinner where the host does not assign guests a dish to bring or communicate what people have already offered to bring? You may try to figure out what you think other people are going to whip up so you choose something else. Instead, you show up and there’s three salads, several bags of chips, and ohh so much cheese. Not assigning a contract manager works a bit of the same way. The host *assumes* people will know what to bring, but the party ends up having enough cookies to feed a small army. Not like having too many cookies or cheese is a bad thing … but what about entrées?

Filing systems work well when one person owns the entire thing or when everyone using them is well-trained. In today's business world, neither is likely to happen. So someone sets up a filing system that works for them, and then it gets “used” by the whole organization.

That's when the “fun” starts. Documents wind up in the wrong folders. Managers can't find the contract they need. Contracts end up getting named something wrong and search doesn't work well. People start storing PowerPoints with contracts. What’s that marketing poster doing with the utility contract? Pretty soon, the folders are a mess, and it gets harder and harder for anyone to find what they need.


Solution: Avoid traditional filing methods and opt for a tool that offers Google-like search or tags to mark important documents so that you can quickly get your hands on the right document at the right time. … Or be prepared to train everyone on how to use your system and police it regularly.  Another solution is to follow these file naming best practices:

5) Not Being Careful About Who Can Delete Contracts

Usually the big concern is who has access to see contracts. Managing access is really important. However, the often overlooked part of access, especially with shared folders and drives, is WHO HAS THE RIGHT TO DELETE?

There once was a company owner who accidentally deleted his whole company with one mistaken piece of code. We are not making this up. The Independent ran the story. This man accidentally told his computer to delete everything on his servers.

While this is an extreme example, the real issues are:

Solution: Stop these dumpster fires before they can happen by setting simple controls on a contract management software for who can view or, more importantly, delete files. Bonus: Make sure your system allows you to restore deleted files if needed. (If you’re a company owner … you probably want to take a step back on this one and revoke your own permissions …).

There's nothing worse than preparing to renegotiate a contract only to have a teammate waltz in at the last minute and say, “Oh yeah, we signed an amendment that changed all that two years ago.”

Well, actually it's worse when you're in the middle of a negotiation and your counterparty says it. Either way, you don't want this to happen.

Solution: File all your amendments with their original contracts. Or at least put a note in that says “See amendment.” This works if you are really diligent about labeling with paper files or even with shared drives. What works even better? Online systems. It's usually fairly easy to link an amendment to a contract so that whenever you are looking at an amendment you see the master or more importantly, when you look at the master contract, you see all the signed amendments.

Alright you guys … we know you have made a few contract mistakes in your day. What did you do and how did you overcome it? Click the quote box in the lower right corner to let us know!